Powers Beyond Their Steam 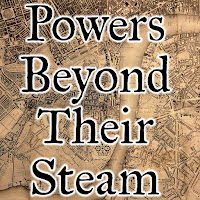 The Powers Beyond Their Steam series

The Powers Beyond Their Steam series is a Steampunk Fantasy series for middle-grade readers (and the adults who love them) set in Victorian London.  They follow the adventures of Ib, a former child chimney sweep, and Professor Delby, a befuddled genius whose gearwork creations have a bad habit taking on minds of their own.

Supported by Bentley, the Professor's all-knowing butler, Ib works to untangle himself and Professor Delby from the problems they encounter, problems often made even more complicated by their inventions. 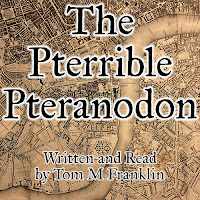 A steam-driven mechanical pteranodon is out of control over Victorian-era London and the Queen is not amused.

Nine-year-old Ib cannot believe his luck. He finally has a room and bed of his own and a bounty of food each day—all for agreeing to be the lab assistant to Professor Delby, an odd, befuddled genius. In fact, the professor's quirks almost make the job fun.  Then the frightening gearwork model pteranodon in the Professor's laboratory comes to life and escapes into the London skies.

Her Majesty’s Royal Guard give Ib and the Professor two days to capture the renegade machine or be thrown into newly excavated dungeons in the Tower  of London.  Eager to remain free, Ib tries to help the Professor with a plan that only manages to provoke the pteranodon further.

When the Royal Guard carry off the Professor ahead of schedule, it's up to Ib to come up with a way to save them all -- but will his solution end up making him extinct as well?


Chapters are available as free audio files at the following podcasting sites:

Written in 2015, The Pterrible Pteranodon was a story strong enough to land an agent.  It was submitted to over a dozen publishing houses.  Despite the universal positive feedback on the story, none chose to publish.

The manuscript sat, collecting pixeldust, until the 2020 COVID-19 crisis.  While wondering what I could offer to make the world a bit brighter, I decided to read the book aloud as a free, serialized podcast.  It's my hope that Ib, Professor Delby, and Bentley might bring you some of the joy they've given me.